Original story: Tampa Bay Buccaneers quarterback Jameis Winston was removed in the third quarter of his team’s Week 14 game against the Indianapolis Colts due to a right hand injury. He was replaced by Ryan Griffin and his return is questionable.

Prior to going out, Winston completed 20-for-28 passes for 277 yards, two touchdowns and two interceptions.

As previously reported here on NFLNews.co, stud Bucs wide receiver Mike Evans is out after suffering a hamstring injury. 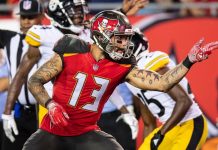 Confirmed: Season Over For Mike Evans