San Fransisco running back Jerick McKinnon suffered a setback at practice on Tuesday and it’s “not encouraging,” according to the team’s General Manager John Lynch per Brian Murphy. Details are not currently known but it sounds as if his 2019 season is in jeopardy.

McKinnon signed a four-year $30 million contract with the 49ers in 2018, however, he missed last season due to a torn ACL.

The former third round pick out of Georgia Southern enjoyed a very productive 2017 with the Vikings as a pass catching specialist. He caught 51 passes for 421 yards and two touchdowns. He rushed for 570 yards and three touchdowns.

Tuesday was the first day McKinnon had practiced in three weeks, according to Cam Inman.

Baltimore Ravens Did NOT Put In Claim For Terrell Suggs 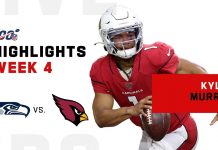