So much for that rumored Ravens/Suggs reunion. We reported earlier that Terrell Suggs was claimed by the Kansas City Chiefs. Now we know which teams put in waiver claims.

The four teams were the Seahawks, Saints, 49’ers, and Chiefs. Since Kansas City had the highest claim priority they were awarded Suggs. The Ravens did not put in a claim.

Suggs was rumors to sit for any team that claimed him not named Baltimore, where he played for the majority of his career. I don’t see him sitting since the Ravens didn’t even attempt to claim him. They may have tried to sign him if he claimed waivers.

Since the Ravens have the best record they wouldn’t have been able to claim Suggs. There really wouldn’t have been a downside to putting a claim in if they wanted him. A claim attempt would have at least kept Suggs from reaching an open market, should he have reached free agency. 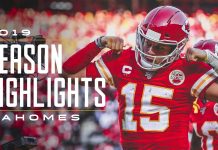 Patrick Mahomes Expected To Get Extension After 2020 Draft