Colin Kaepernick’s scheduled workout did not go as planned Saturday in Atlanta, GA, creating one of the more bizarre stories in quite some time.

As previously noted, the NFL sponsored workout was moved in the hours leading up to the event. Apparently Kaepernick’s reps became weary of the league’s intentions when they were refused in their requests for the event to be open to the public.

In addition to the league’s statement on the matter, the verified NFL Communications Twitter account tweeted the following:

Colin moved his workout to a facility an hour from Atlanta Falcons Flowery Branch facility. No one got a heads up until NFL saw the Twitter statement. Kaepernick was a no-show for 25 NFL teams at Falcons facility waiting at 3:00 pm.

Hue Jackson was scheduled to run the session and while he was invited to do so at the new location, he returned to the airport. Wide receivers Bruce Ellington, Brice Butler, Jordan Veasy and Ari Werts were on the field with Kaepernick, as well as his friend and Panthers safety Eric Reid.

Kaepernick’s representatives claim the league required he sign an agreement that included language that would limit him to bring claims against the league. This has some, such as Mike Florio, believing the workout was a ploy by the league to put the free agent quarterback in legal checkmate.

After moving the location, the only teams that had reps present were the Chiefs, 49ers, Eagles, Jets, Titans, Redskins and Lions.

The session was streamed live on YouTube and maintained an audience of about 45,000 viewers. One NFL executive felt Kaepernick’s arm talent as “elite” and on the same level as “when he came out of college.”

Kaepernick made 60 throws and didn’t appear to have lost anything since he last played in 2016.

Kaepernick did not give any formal interviews but said he would hold an interview with any team. He thanked his fans and stated, “I’ve been ready. I’m staying ready. And I’ll continue to be ready….The ball’s in their court. We’re ready to go.”

You can watch the session embedded in the video above.

Patrick Mahomes Expected To Get Extension After 2020 Draft 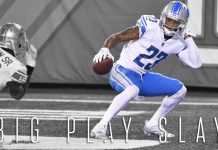