Raiders WR Antonio Brown will play Week 1 against the Broncos on Monday Night Football, according to head coach Jon Gruden per Adam Schefter.

Brown was facing a suspension and was even at risk of forfeiting $30 million in guaranteed money after blowing up on general manager Mike Mayock at practice earlier this week. He has apparently gotten himself back in the good graces of his teammates, coaches and possibly even Mayock with an apology on Friday.

Brown, 31, will have to be on his best behavior moving forward as the Raiders were legitimately looking for ways to move on from him on Thursday. For now, it looks like he will suit up in silver and black in Week 1. 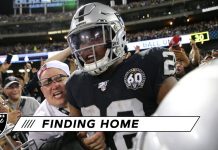 More On Release Of WR Antonio Brown, When He Can Play...