Yes fantasy fans it is true. Saquon Barkley, the number one overall pick in almost every draft went down and is out 4-8 weeks. How will Barkley owners fill the void? How will everyone else block Barkley owners and help their teams instead? By hitting the waiver wire of course!

Daniel Jones – Last week I said to stash him, this week he is a priority add. The New York Giants for good reason benched Eli Manning. DJ threw for 336 yards, ran for 28 yards, had 4 TD’s and a 2 point conversion. Best of all for Giants fans he got the W. He has a prime match up against Washington this week.

Kyle Allen – Cam Newton has a lisfranc and will be out a while. Kyle Allen stepped in and stepped up for the Carolina Panthers. Like Jones he had 4 TD’s and the win. Also like Jones he has a great match up this week.

Wayne Gallman – Gallman is the back who will benefit most from Saquon Barkley’s high ankle sprain. Don’t expect Barkley production but expect him to likely be an every down back in New York.

Rex Burkhead – Rex is a player I will look to add in leagues where available. He took advantage of his extended role for the Patriots with James White out. He also absolutely outplayed Sony Michel. He has Belichick and Brady’s trust, catches balls, and gets goal line carries. New England’s backfield is always hard to figure out but Burkhead when healthy has always had a comfortable role.

Ronald Jones II – Jones has emerged as Tampa Bay’s running back to own over Peyton Barber. With 80 yards on 14 touches and 41 yards on his sole catch the Buccaneer’s should feel good about giving Ronald Jones the featured role there.

Golden Tate – Last call on Tate. He will miss one more week on suspension but will be back with a fancy new quarterback. Tate is an aggressive player who can catch in traffic and break tackles. He will provide leadership and toughness to a young NYG offense.

Sterling Shepard – Did I mention this is the Giants edition? Sterling Shepard caught 7-of-9 balls for 100 yards and a TD. The Redskins have given up the most points to wide receivers this season and that’s who Shepard faces this week. Start him with confidence.

Terry McLaurin – The Washington Redskins rookie has played well and scored in all 3 of his games as a pro. I don’t love the Redskin’s offense but I can’t argue with his results. He should be rostered everywhere.

Will Dissly – Dissly has been my break out guy and I have been begging fantasy owners to pick him up, somehow he has gone largely unnoticed and is owned in 46% of Yahoo leagues. He has 3 TD’s in as many games this year and is outplaying both Greg Kittle and Zach Ertz.

Chris Herndon – I like to be proactive getting payers I want before everyone else. With the Jets on bye and another week left on suspension, Herndon won’t be back for 2 weeks. His return will likely coincide with QB Sam Darnold’s. Last year he was the Jets’ best receiving option and will help spark a stagnant Jets offense when he returns.

Los Angeles Chargers – The Chargers D have not lived up to expectations to start the season and have been dropped by a lot of owners. THEY PLAY MIAMI THIS WEEK!!! This game could be the spark they need to get back on track. 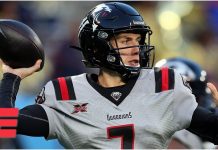 Cleveland Browns Release OL Greg Robinson, Then They Sign Him Back