Tennessee Titans left tackle Taylor Lewan has been suspended for the first four games of the 2019 NFL season.

Lewan announced last month he was facing a four-game suspension due to a failed drug test for Ostarine. He claimed to have unknowingly consumed the substance and even took a polygraph test.

The NFL announced Friday his appeal to the suspension was denied. He is eligible to play in the preseason but after that will not be available for the Titans until Monday, Sept. 30 following the team’s Week 4 game in Atlanta.

Dennis Kelly will start at left tackle in Lewan’s absence. 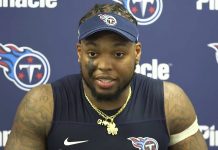 Derrick Henry’s Breakout Continues – One Win Away From Super Bowl

Ryan Tannehill Expected Back With Titans Through Franchise Tag Or Extension

Ryan Tannehill Expected Back With Titans Through Franchise Tag Or Extension