DC Defenders wide receiver Rashad Ross caught two passes for 52 yards and a touchdown in his team’s 31-19 win over the Seattle Dragons on Saturday in Week 1 of the XFL season.

Ross, a former Washington Redskins player, finished the eight-week AAF season with the second-most receiving yards and seven touchdowns before the league folded. He was unable to make the Carolina Panthers last season but continues to prove he is one of the best talents not signed to an NFL roster. 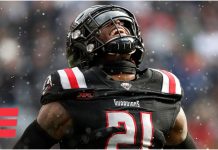